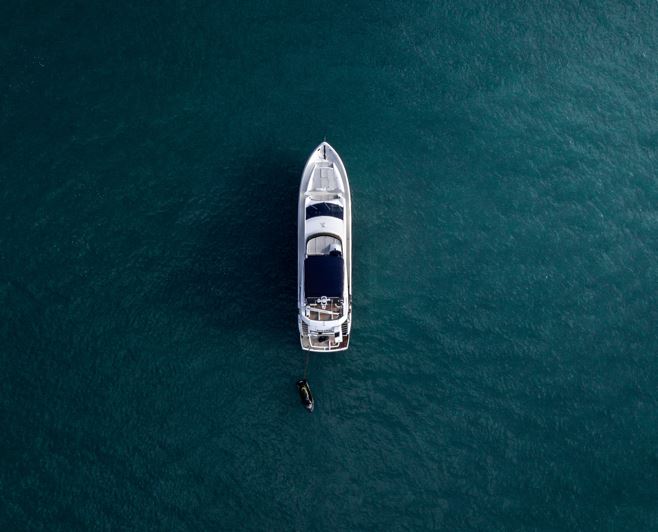 Even the chief executives of investment banks have to work weekends. In the case of David Solomon at Goldman Sachs, this might involve taking the GS private jet to the Bahamas to catch up on a few things. Following the outcry about this earlier this year, however, Solomon is unlikely to be posting any photos of his laptop in action in the sun. Jefferies' CEO, Rich Handler, is less inhibited.

Handler, who has an Instagram account with 31,000 followers went to visit his billionaire friend and client Tilman Joseph Fertitta last weekend. He has since posted an Instagram story all about it.

As we can't embed Handler's story here, we've taken a few illustrative screenshots. It's all quite tongue in cheek and syncopated, but fundamentally Handler arrives by 'copter, does some of his trademark bouncing exercises aboard the yacht, and then flies home so that he can to return to the office on Monday. There's not any sign of actual work being done, although Handler assures us that this is the case. Fertita, who featured on CNBC show 'billion dollar buyer' owns restaurants hotels and casinos. He and Handler had a SPAC called Lancadia Holdings, which raised $500m before merging to become Hillman Solutions Corp in July, so maybe they were talking about that. 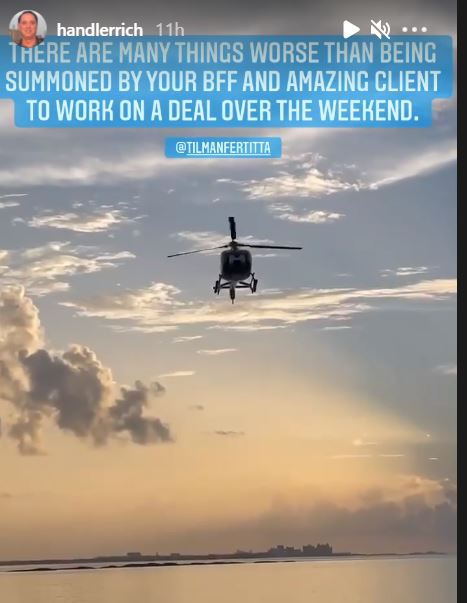 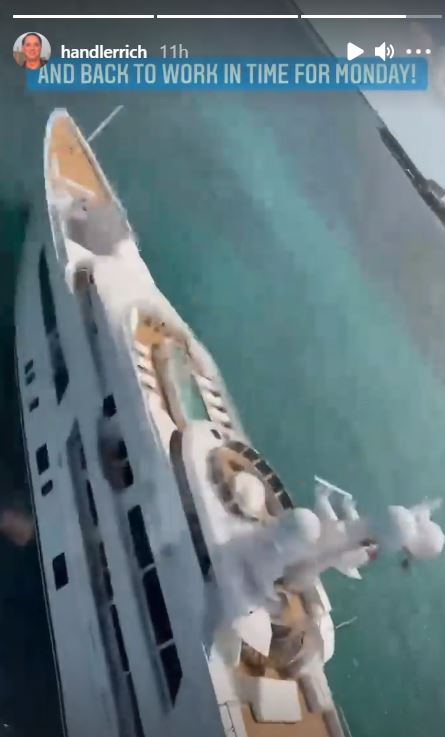 While Handler's post is more fun than flex, it may nonetheless irk Jefferies juniors who have been spotted on forum website Wall Street Oasis venting about their working hours and the Instagram antics of their CEO. According to our most recent tally of the Wall Street Oasis working hours tracker, Jefferies is similar to Evercore when it comes to hours worked per week - but pays quite a bit less (the two banks initially increased their junior salaries to the same level, but Evercore then increased its salaries again). While it's nice for their CEO to be flying in helicopters and doing deals on yachts, some JEF juniors might want a little more recognition of their own realities instead.

Separately, junior investment banking work is not what it was. The Financial Times has been speaking to various consultants and ex-banker-academics who say that it's not just deals that have increased, but the pace at which presentations are produced.

"The velocity has changed forever since the pandemic,” David Erickson, a lecturer at Wharton and former banker told the FT. “Instead of eight to 10 [presentations] a week for the team, it’s now eight to 10 presentations a day.”  Roy Choudhury at Boston Consulting observed that 60-65% of junior bankers' work is, in fact, about data preparation and aggregation. "That’s ripe for automation," he added.

Complex balance sheets mean banks like to pick their new CFOs internally. Alastair Borthwick at BofA is the latest example of this phenomenon. (WSJ)

Fidelity wants to increase its digital-asset employee headcount by up to 70% between April and year-end. It's not clear what this means in absolute terms. (Bloomberg)

Citi hired Harry Naysmith from Goldman as its vice chairman of banking, capital markets and advisory for Southeast Asia. (FiNews)

Google is a honey trap that will burn you out. "The pay is good. You're surrounded by incredibly smart people. There are snacks on hand. And the (generally) reduced level of bullshit makes it a nice place to stay." (Business Insider)

It's difficult to do risky deals when you work from home. “We’ve been wary of the cap on our ability to get confidence in a situation. You think, ‘Well, unless we really feel comfortable about knowing what’s going on here, are we really going to risk X? So let’s only risk 60 per cent of X.’ ” (The Times)

Ralph Hamers is giving Iqbal Khan carte blanche to do what he likes at UBS. "I would say a lot has to happen over the next 24 months, otherwise Iqbal Khan is going to be CEO." (FiNews)

As junior bankers return to the office there have been behavioural lapses like confessing to finding a colleague attractive and pushing to continue partying at clients' homes. (Financial News)

Photo by nikldn on Unsplash