Growing a bank from the ground up: Two women explain why they joined AIIB in Beijing 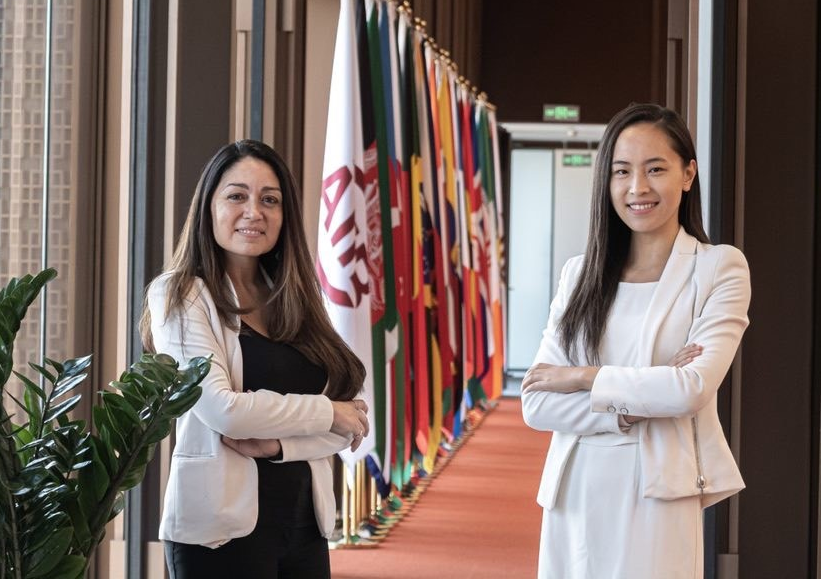 Lily Jin had been working as a New York-based investment banker for almost four years when she decided to leave Wall Street behind and take her career in an exciting new direction. In October 2020, Lily relocated to Beijing and joined the Asian Infrastructure Investment Bank (AIIB) as a member of its investment team.

AIIB, which was founded in 2015 and is headquartered in the Chinese capital, is a multilateral development bank focused on funding infrastructure projects. Lily says she couldn’t turn down the entrepreneurial challenge of helping to grow the bank from the ground up. “Entrepreneurship is a value that’s very important to me—the mantra of rolling up your sleeves, challenging dogma and taking risks,” she adds.

Growing up in a first-generation Chinese immigrant family in Texas, Lily says she shares many of AIIB’s other values. “My upbringing motivated me to be self-sufficient, work hard, render service to others and create meaningful outcomes for society—and in return be rewarded by meritocracy and capitalism. AIIB’s ultimate vision also aligns with my aspiration of solving economic and social problems structurally, effectively and sustainably in Asia at scale by investing in businesses,” says Lily.

Lily’s colleague Natalia Sanz was working in Bogotá, Colombia, for the Inter-American Development Bank when AIIB got in touch with her about a vacancy for an investment operations specialist covering the transport sector. “My skills were a match, and although I hadn’t thought about jobs in Asia before, I saw it as a wonderful opportunity for career growth. Moving to China meant stepping out of my comfort zone, coming to grips with an entirely new culture and working on new types of projects,” says Natalia, who is from Argentina.

When she first joined AIIB in 2019, Natalia was struck by the diversity of its workforce. “Coming here, I really found out the meaning of the word diversity. We have so many cultures represented among our staff, and this makes us more effective as an organization because we bring different perspectives to the table to solve problems,” she says.

Natalia says AIIB is also making concerted efforts to recruit and retain more women. “In my experience, the infrastructure banking sector globally isn’t particularly gender diverse, but AIIB is at the forefront of changing attitudes. Our Environmental and Social Policy provides that our projects must improve access of poor, disadvantaged and disabled people to social infrastructure and to ensure that their voices are heard. Our projects consider gender and inclusion, so we need our workforce to reflect that. We have women in our leadership team, and people like Lily and I are paving the way for others to follow,” says Natalia.

Prior to Covid, Natalia spent much of her time on-site at AIIB development projects across Asia. “This enabled me to better understand the communities we work with. A job here isn’t only about writing documents—it’s about helping people have a better life,” she says. “As a woman, I expected to experience resistance working in certain countries, but I haven’t encountered any, and sometimes being female is an advantage. On one trip to India to visit a road project, for example, a local woman sought me out to chat woman-to-woman about how her community would be impacted,” says Natalia.

Given her investment banking background, Lily mostly focuses on infrastructure investment transactions for private sector companies. “The rewarding and exciting part about the job is working with CEOs, CFOs, managers and companies in their rapid-growth phases, and potentially finding a way to finance their business plans and expansion goals. Their success ultimately makes a positive development impact to our region and generates an attractive return for our institution,” she says.

Lily says her role at AIIB requires technical skills such as financial analysis, credit analysis and the ability to evaluate a company’s capital structure to determine an investment return or evaluate the value of a transaction. “Most importantly, you must have a desire to make an impact on society and be able to effectively and constructively communicate and empathize within a team,” she adds.

In 2020, AIIB opened its new headquarters at the Beijing Olympic Park, a sprawling development toward the north of the city. Spanning five office buildings, the bank’s HQ features its own coffee shop, gym and dry cleaners. “AIIB has thought of everything to make us comfortable and it’s also a very social environment here. There are movie and karaoke nights, a running club, a cycling club—a club for pretty much everything,” says Natalia. “The organization understands the challenges of moving to a new city, so it makes an effort to make new employees feel at home.”

For Natalia, the biggest initial challenge of moving to Beijing was not knowing Mandarin. “Fortunately, AIIB was very supportive when I arrived. There was a colleague waiting for me at the airport and the bank put me in touch with property agents who spoke English,” says Natalia, who is now learning the Chinese language. “I’ve noticed that people in Beijing, both in and outside of the office, are friendly and like to help foreigners.”

Beijing is an “incredibly diverse” city, says Natalia. “It has a rich blend of impressive modern buildings and traditional neighborhoods. It’s a place where you can start to understand Chinese culture, but it’s also becoming more international. You can always find expats from your own nationality when you want a connection to home,” she explains. “While there can be a lot of traffic, Beijing is also very bicycle friendly. There are great restaurants in the city, and good hiking and skiing only an hour away.”

“I enjoy almost every aspect of living in Beijing largely because parts of my identity are rooted in the region,” adds Lily. “One thing I’ve learned from living in a new environment is that having an open mind can be helpful. There will always be people in the community who are welcoming and willing to build a bridge for you.”